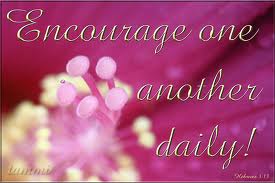 Today was a good day! It wasn’t because I was dealing with anything less in regards to my pain, but it was the fact that I made a difference in a stranger’s life. I was at the till at a local store today when the cashier stopped me and asked me what was wrong with me. At first I just took it as yet another person that was asking me about my story. From the questions that she was asking me though I knew there was more to her than I expected. I gave her the readers digest version of my story, and expected that I would be on my way. Then she proceeded to tell me that she had a family member that was dealing with some health issues, and that she had been doing a lot of research to try and find out what was wrong with her relative. We had about a five minute conversation talking about similarities in her sick family members condition and mine. She was really struggling with finding out what was wrong with her relative. I had shared with her that it had taken a really long time to diagnose me, and I am sure this gave her hope for her relative. In the end she told me that she was inspired by how I handled living with something like CRPS.

When I was met by this type of response this morning it made my day. My attitude and how I was choosing to deal with my illness, really made a difference in this persons life.  If I can make a difference and help others an motivate them to get better, then I’m making something positive happen. That’s what excites me so much. It’s not about me and I would never want it to be about me. It’s about having a positive attitude and making the best out of something that for whatever reason I have to live with. If I can help a person in some small way by sharing my story then I will.

After leaving the store it got me thinking about everything that I’ve been through over the last six years. It got me thinking that what I’ve had to go through over that time hasn’t been all bad. There are things through all this that have strengthened me and built up my character. Even though there have been some really tough times through all of this, there has always been something positive on the other end. It’s just really hard to see that when your in the middle of going through something so difficult. Of course God has been there every step of the way. The strength and many more things that He has given to me, have helped me in ways that I find hard to explain. The journey isn’t over because I still have lots of things to deal with. In God’s timing though all those things will be dealt with.

It’s hard to stand in faith and trust that God is going to help you through all the things that you might need help with. Don’t get frustrated that things may not happen overnight, but trust that if you have asked Him to help you then it will happen. Over time I’ve seen those changes starting to happen and there is more to come. I can’t say when this is going to end, but my faith is strong and I feel good and positive about things. So my challenge to all of you out there with CRPS or chronic pain is this. If you know someone who is dealing with CRPS or chronic pain, give them a word of encouragement this week.