Hi everyone! Hope your weekend was good and that your well rested going into the new week. In my house it was pretty busy filled with a little bit of everything. The highlight of the weekend had to be taking my two daughters out for lunch on a daddy daughters date! Even though some days are tough with the two of them, dates like the one on Saturday make it all worthwhile. I’m still trying to get through some of the pain from the surgery even though I’m almost three weeks into it. As well this weekend I spent some time completing my photography assignment for the class I’m taking. So I’ll post a few of the pictures for you to see.

You have to promise that you won’t laugh though because I had a hard time with trying to pick subject matter for the assignment. The project we were working on was shooting a custom white balance and so we had to shoot three shots. One of the shots had to be white on white so I chose to put a sculpture of my wife’s against a piece of white tissue paper that I crumpled for texture.

The second photo had to be black on black followed by the third which had to be black and white on color. I don’t have a lot of black in my house, or should I say I don’t have a lot of black that made sense to put together to make a picture so I’ll spare you those photo’s . However the third combination was black and white on color. So I decided to have a little fun with my daughters stuffed animals and some black beads. The idea is that the dog is losing his spots! 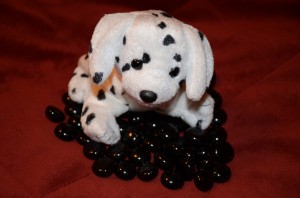 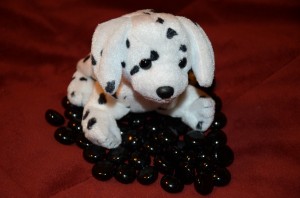 Anyway I did the best with what I had around the house, and was able to learn a lot in the process. It’s about learning to control my camera better. If your saying what’s the difference between the pictures it’s that the colour tones have changed! This was a great exercise because it really taught me to look at the picture. I know not everything is right but that’s why I’m in the class.  I just have to remember the goal in all of this, and that’s to come out of these classes a better photographer!