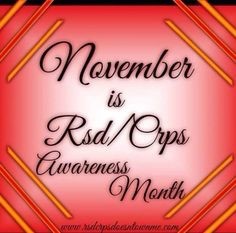 It’s Nov 1! What’s so special about today? Well it’s the start of CRPS Awareness month! So over the next thirty days you’ll be hearing a lot about the illness that has impacted my life so much over the last nine years.  Seeing as my site talks about CRPS on a routine basis, I had to try and think of how I could do my part in trying to raise awareness over the next month. So what your going to see on every post from today until the end of the month will be a fact about CRPS. So without delay here is today’s fact.

Fact #1    Many health care professionals and consumers are unaware of its signs and symptoms. Typically, people with CRPS report seeing an average of five physicians before being accurately diagnosed.

With my case it took about six different doctors and then a flight out to Vancouver to get my diagnosis. It took about a year and a half in total before I finally knew what I was dealing with, and before I could get any type of correct treatment plan put into place. At the least someone should have been able to tell me who to see or where to go. When nobody in the entire city is able to direct me as to where to go there’s a problem. Now I firmly believe that not every physician is going to have an answer to everything. Nor is it fare to expect that they are going to know every disease, illness, or medical mystery that’s out there. That’s where those of us who do have a diagnosis have a responsibility to step up and help educate, and I do believe that’s happening.

In the nine years since my diagnosis here in my city the physicians are getting better at recognizing the symptoms of CRPS however in other areas it’s very clear training is needed. While I was in hospital at the time of my implant surgery, over and over I had to educate the nurses on what CRPS was. I found myself explaining how my body reacts to pain numerous times, and the different symptoms that CRPS presents. It got frustrating because there were lots of times where their lack of knowledge stood in the way of them being able to treat me effectively. The first three days or four days were spent trying to get my pain under control because they didn’t truly understand what I needed in the way of medication. Or the simple fact that as a CRPS patient my medication needs to be kept to a strict schedule in order to best control my pain. During those first few days they struggled to help me with my pain. On day five along came one of the staff from the implant clinic that works with me. After she made a simple change to my meds things were better controlled.

A little education in those first few days would have made a big difference in the way that my treatment was carried out. I’m not upset with the nurses at all because they didn’t have any background with CRPS. There’s a real training opportunity there however in the way that CRPS patients are cared for. Those training opportunities are only going to happen however if those of us who are dealing with CRPS stand up and speak out. We need to give our feedback to the proper people and tell them that our care matters. So with all of this being said CRPS Awareness Month is a great chance to start educating! This month I challenge all my fellow bloggers and social media gurus with this. Every week post a fact on your blog or form of social media you use the most about CRPS. If you don’t blog or go on social media then tell a friend or colleague something about CRPS every week!

Lets use this month to make an impact!